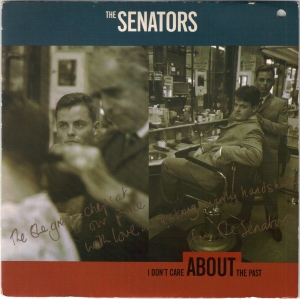 It means nothing to me, I’ve got nothing to say. You can shout or smile but I’m not made that way. I can leave it alone, nothing ever lasts. I can get along, I don’t care about the past.

Two hopeful young men in natty suits on the promotion trail with a gold ink pen, scribbling on a seven-inch single picture sleeve for a record shop chain that doesn’t exist anymore. I was briefly found that way myself too, although I’d honestly have to say without anything approaching the same amount of potential as this band. I’m pretty sure that The Senators were from Wales and this is their debut single and also easily their best record. It’s good when you get one like that, straight out of the traps.

I don’t know where I bought it now but I’m so glad that I did. It has a punch-hole in top right which implies it may have been a promo or budget-priced from one of those cheap boxes I used to troll on record shop counters in the North of England.

The catalogue number on the back of my copy tells me it’s forty-three singles previous to my band’s debut on the same label from the very next year. I wonder if anyone out there treasures a signed copy of one of ours, in the same way that I do this one.

Looking at the sleeve I’m reminded of a conundrum that I still have years later. What does it actually say in those first few words? “The (something) great chaps at Our Price…” I can’t read his writing and I never met them to ask.

The song itself is an underrated classic, very much at odds with the order of the day from the late eighties big-beat and brassy pop you could find on the same label. It has a timeless soul quality to it, a yearning like the best records do, and like it could have been recorded and released just yesterday or many years previous. I picked up the band’s debut LP Welcome To Our World too, in its case possibly gratis from the label, and again this song is the best thing on there.

Try to hear it if you can. See if you can feel it too.

3 thoughts on “I Don’t Care About the Past”