This song to me is just a dream, and an ideal. A pure fantasy.

A young boy waits patiently by the window for his father to come home. His dad drives a big American car that he is so proud of, and almost every word of the song echoes his passion for it. You can feel it in the life around that car for the boy, and in the detail of his father’s daily grind in the geography of the journey.

The second verse implies a distance between the son and his ideal. He lies in bed in the morning and listens to his dad getting ready for work, but he’s gone by the time he gets out of bed. It doesn’t describe any further the relationship between father and son, but leaves it hanging with just enough for the listener to fill in the cracks.

At least that’s what it does for me, because it speaks to me about my own fantasy life with my father too.

Silver Thunderbird is the second single from Marc Cohn’s self titled album in 1991. It’s the follow-up to the Grammy winning Walking in Memphis, which is permanently placed in my all-time top-five most loathed songs on planet Earth.

What’s worse is that I seem to hear that more famous song everywhere I go; whether it’s in line at the bank, in the grocery store, or at least once a day in my workplace. Cohn must have made enough moolah from that dang song alone to happily live on a small island with his piano for the rest of his life.

Walking in Memphis is just a cheesy list to me, a grab-bag of Memphis cliche, and in my mind I have often performed my own cover version of the song as part of a comedy routine.

My version is called Wikipedia Memphis, and it goes like this.

A piano player, a singer, and a placard bearer a la Subterranean Homesick Blues.

Singer: … and I boarded the plane. Touched down in the land of the delta blues…

Placard: “The delta blues is one of the earliest styles of blues music…”

Singer: … in the middle of the pouring rain…

Trust me on this one, this imagined sketch has kept me entertained in different versions for every time I have to suffer that infernal song. So as a result of my disdain I shan’t ever be able to fully invest into the album-length work of Marc Cohn, but just content myself with my perfectly formed compact seven-inch single version as pictured here.

I watched the Silver Thunderbird video on You Tube – the view-count paling in the shadow of his ten-million-plus other song – and although its story is something of a literal translation I can still take it. With some maneuvering I can just about place my own life with my father into it.

Today being Father’s Day I recall how I used to avoid this day when I was a Facebook subscriber. “Here’s me and dad at the ball game…” or “enjoying a couple of beers…”, came post after post. “Here’s us hanging out at the mall… and now playing a round of golf…” Heck, even going walking in Memphis would have suited me over barely being able to stroll with mine.

This isn’t meant to sound woeful at all. It isn’t a bleat. It just is what it was.

It was just different times in the seventies and eighties. Dads didn’t have to bond with their kids, and besides my younger brother was much more dad’s speed anyway, by taking apart car engines on newspapers in front of the kitchen fireplace. Dad could relate to that. I had an earring and often brought home weird loud music, trying to get band after band off the ground.

He was a simple man, my mum said. These days I call him a Pleasantville dad, after William H. Macy in the film of the same name. He sat and read his paper, cut the grass when needed, drove mum to the shops, kept himself to himself, didn’t want to be disturbed.

He passed away from Parkinson’s complications in 2003, and I was over here in the states for most of that, so I didn’t get to say goodbye to him, which again is just what it is since we weren’t particularly close anyway. Maybe it’s just the modern age that places such importance on the way parents are with their kids.

Earlier this month I took my vacation back to the old house, the only one I’ve ever known, and with mum now in assisted living I had to sort out the small mountain range of photographs that had accumulated in albums and drawers and boxes. My sister said she couldn’t do it, by her own admission being far too sentimental for the serious amount of editing that would have to be done.

I managed to cram a small suitcase full of mostly black and white photos, many of my dad when he was a lot younger, most of which I’d never seen before, not being interested when I lived there. I made the suitcase my second carry-on for the flight back, not wanting to risk losing them in transit.

I hadn’t really thought about the fact that there aren’t any photos of my dad and me after we’d stopped taking family holidays together when we were very young. I tried to find one to post with this piece but couldn’t. Again, our family just didn’t think about stuff like that later on, but just got on with it. It is what it is.

So instead I get to try to place him leaving the house at the wheel of a big American car, Willy Loman style, driving with his packed lunch into work, and not putting the radio on because he didn’t care for music, he once said in earnest to me.

He’d have just taken the journey in silence I suppose, but then even he would have to agree that he’d have looked really good just getting there. 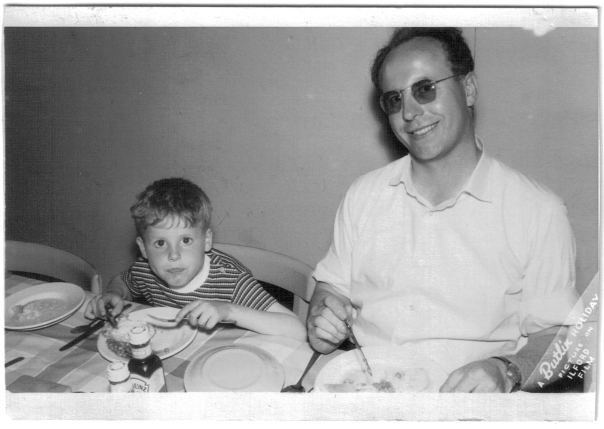 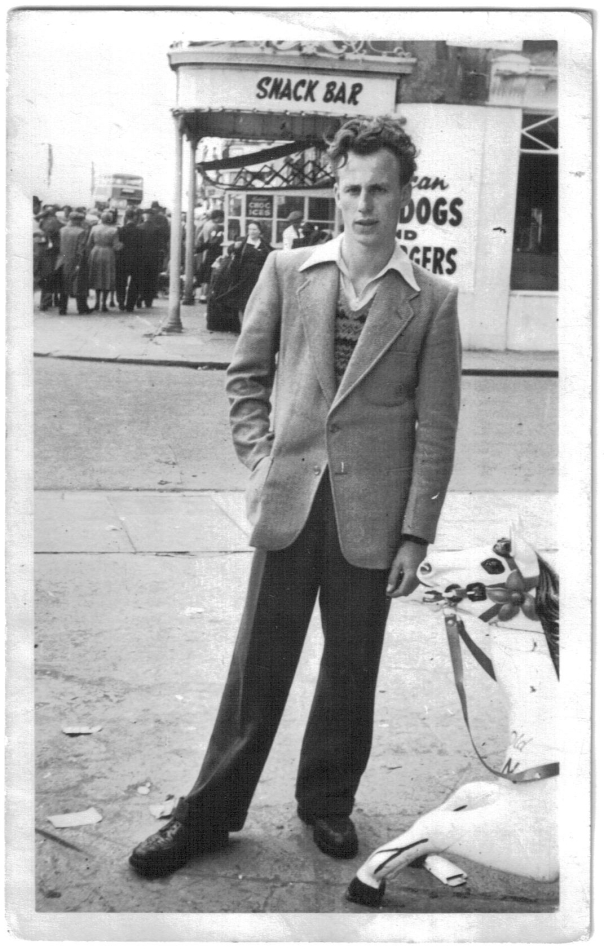